It dawn upon me that some of the “best” photographers are the famous photographers. In today’s age of internet and social media, popularity and fame falls upon those that are able to blog and express their photos. Maybe its not a popular opinion but from time to time i am often confounded at the quality of portraits or streets that are shared by some online photographers. Its not that they are bad, they just didn’t satisfy my thirst for inspirations.

I visited Hanoi on 26th-30th december, hazy and cloudy, there isn’t much good lighting to look forward to but i was really excited to see some of the unique scene in Hanoi and wanted to do some shoot there with a model.

I had this peculiar camera with me, its nearly a 80 years old and do or die, it’s the only gear i brought with me.

I brought along some Kodak 400 porta and Fuji 160NS 120 films.  After walking around the streets i notice a unique occurrence in the Old Quarters where a live railway runs thru the city, this is it, i told myself, i need to do an album here.

Thru SanAsia Event, a model was selected for my shooting, her name is Phuong Thao. The agent Miss Dao Thuong from SanAsia Event is a savvy and charming lady, she  told me that Phuong Thao is one of the top 30 in Miss Vietnam search but her dreams are cut short because she could not fund her own glamour outfits nor photo-shoot.

Miss Thao could understand english but her pronunciations of the english language sounded queer to me. The agent Miss Dao told me that this is a common problem in Hanoi, mainly because graduates are taught in the wrong pronunciations.

While shooting i thought of how lucky the other pageants and contests are in other countries as most of the requirements and needs are covered by sponsorships and the organizers.

After shooting two rolls of film, Miss Dao from SanAsia suggested that we should do the next shoot at Long Bien Bridge, a french architecture marvel that is still supporting the commuting activities in Hanoi. 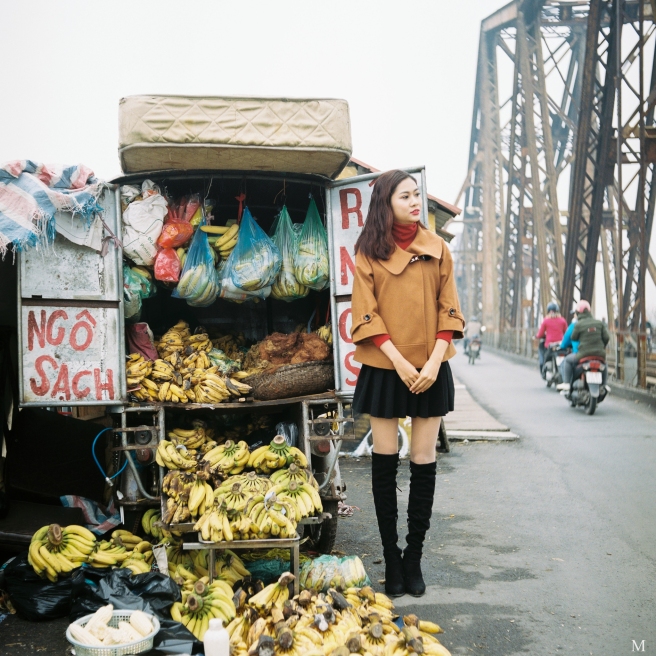 Despite the weather which was hazy and the light is flat, film tones are just so beautiful. It brings out the moment and the very life of the scene, when i look at these images i thought to myself, “wow, i could just reenact the scene and hear the sounds of the bikes and see the hazy ambiance”.

Shooting with film has always been special because i need to manually focus the Rolleiflex and i always shoot wide open regardless of camera and lens. On the Rolleiflex automat this require a lot more effort because the focusing screen is just a ground glass, relatively dim with no split screen or focus confirmation of any sorts, you just have to see the image and when you believe you got it in “focus”, you press the shutter.

The efforts slows down your photoshooting tremendously, i needed to do it fast so that Miss Phuong Thao here won’t be posing too awkwardly waiting for me. It is those very effort and focus that you do while shooting film that your mind embeds the scene with everything in it far beyond what you can remember on a casual snapshot.

So how fast was i? Here is an image of a man riding a bicycle while walking his dog in Hanoi.

The guy running the film lab in Kuala Lumpur didn’t believe this is possible. Well, it is. In fact i am a lot slower than Vivian Maier if you have seen her works, those photos that she did with shallow depth of field on the street, they are impossible to be shot slowly.

Here are some other images on the street that i took. 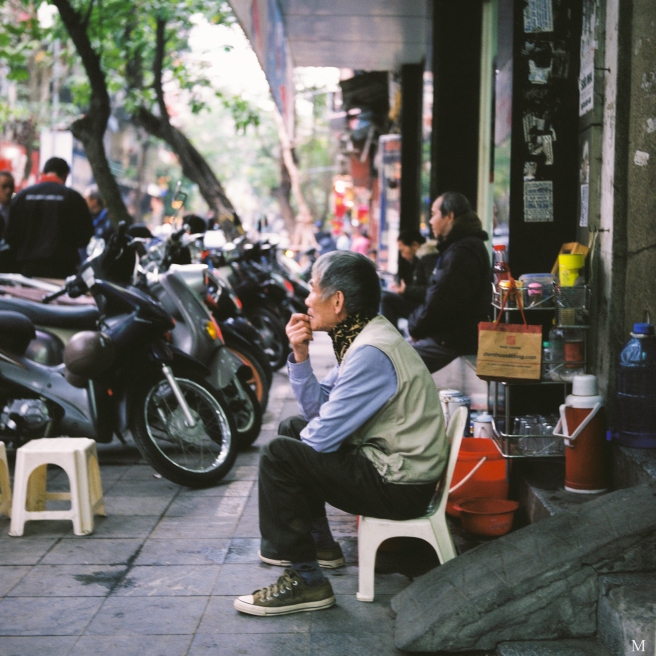 I did bring along a backup camera, my phone, the Google Pixel2. I also took some pictures using it on the rails and the bridge, the results are too crappy to be shared here. Despite being the latest and greatest in mobile photography, “portrait mode” results is far from usable except in the most common scenario of poses.

Feel free to see some of the fail cases of Google Pixel2 here.

Today we live in a world where instant gratification and yada yada is cutting short our experiences and joy in many ways. Film photography as painful as it is, brings back some “pauses” to this world.